.
.
André  Brought Maastricht to Canada
Finally!! Our turn!! André Rieu in CinemaLive is here in Canada!

I was unable to join my friends in Maastricht for the 2012 concerts, but Andre delivered his hometown almost right to my door. Andre Rieu in cinema, it is not a movie, it is not just a 2hr entertainment. In my case, it turned out to be a company event ...

First thing first … I bought tickets online for me and my parents for the 1st showing, then more tickets for the 2nd showing. I also emailed my relatives and friends across Canada to inform them about Andre in our local cinemas, and to make the event more appealing, I have good help from the beautiful fresh-from-the-oven photos taken by fans in Maastricht, posted in The Parlor.

To my pleasant surprise, my boss was the first to respond to my email. He was out-of-town then, but he found the price of the tickets “unbelievable, reasonable” (general admission $16.95, seniors $15.95), and he kindly offered to pay for our staff to go enjoy the show. Sorry my friends, I heard some of you had to pay a lot more for a ticket, like Aussie’s paying AUD40?? almost 2.5 times more at current exchange rate. But look at the bright side, because of Blue Eyes’ popularity, Australia has a lot to offer for Aussie market, while in Canada, we just have to patiently wait for a fire to come and spread like crazy, so a “reasonable” price would attract more audiences, and in our case, it certainly did!


So … to get into the Andre concert spirit, I wore my Andre T-shirt to work. Normally we only do casual wear on Fridays, but SO WHAT I wore a T-shirt on a Wednesday, besides, AR is a brand name and my black 30th anniversary T-shirt matched perfectly with my black pants. If I had plaid pants on, that could be a different story … if you know what I mean ...

I got off from work, had a light meal at home with my parents, some went home to meet up with family, some went to dinner together. I reminded them “it’s not a regular movie so there wouldn’t be any movie trailers, and it’d be a pity if you miss the grand entry, so DON’T be late!”

As usual, there’s not much advertising on the event, so I worried that our group of 12 would be the majority of the audiences. I didn’t expect it to be “crowded”, but if that’s the case, “goooood”, as it means people come for Andre, so getting to the cinema 15 minutes earlier should be fine.

We got into the cinema around 6:45pm. My mission was to get 12 seats together, 6 in a row, so it’s easier to share popcorns, as per my supervisor. Whow! Check that out, those scrolling digital signage board at the door had “Andre Rieu” going round and round and round. We walked through the door, into the dimmed auditorium. WHOA!!! Glad we were not too late!! Some 50 people were already in their seats for Andre-Who concert. NICE!! With my eagle eyes, I saw the only rows we could block 6+6 seats were far far away ... the 2nd and 3rd last rows from the very top....on the other side....Go!! Attack!! Go!! It’s a blessing my almost 84 yr-old dad and almost 80 yr-old mom managed to walk up the stairs without handrails. We went prepared, we had bags and jackets to block some “First come first serve” seats, so we didn’t look too ugly. Good thing we had 3 more people arrived not long afterwards, so 6 people blocking 12 seats...think we looked very decent... When the show started, there were about 80 audiences. 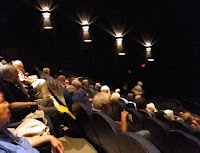 The moment they started the aerial view showing River Maas, I was quite annoyed, I thought “Oh No! I knew it. They’re gonna miss the Grand Entry!” But instead of starting with the concert, they showed sceneries of Maastricht (Second Waltz in the background), and CinemaLive hostess interviewed several fans from around the world. While I was keeping an eye on any heads popping out in the dark near the auditorium door, I caught my friends on the big screen, including sweet Mrs. Ed and Liz. Whewww! Almost missed the ANZACS 5 (not exactly the 5-in-a-bed ANZACS, but there were 5 alright)! Soon we saw Andre left the Theatre steps and walked pass Gauchos, with Pierre and Johann escorting him. One person in our group was still not here...hmmmm. Fortunately, 11 of us were there when the 76 Trombones started. Here he comes!! Bigger-than-life-size Andre !!!

On the big screen, we could see clearly that the restaurants serving Andre Rieu menu were more and more packed every year now. Sooo many audiences, I could barely find my friends, but then suddenly I saw big faces of Richard and Linda. I’m not sure if other friends were next to the UK couple, maybe I missed our beautiful face from Malta, but hey, it’s not easy to see everyone when each of their faces was 8 feet wide. 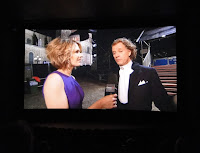 The Concert: I had no idea about the name of the first song that Platin Tenors performed, but it’s a new one for me, and it’s funny. Nessun Dorma...Andre said the audiences everywhere gave a standing ovation, but sorry Andre, I didn’t think it’s proper for me to stand up in the dark. There’s no avalanche for Snow Waltz, but it’s always fun to see how Andre “conduct” this piece, i.e. to signal the audiences to get up on his “Een, Twee, Drie”. Carla the cleaning lady was more beautiful on big screen, I’ve always loved Entry March, and to have the Maastrichter Staar singing at the same time they marched in, it was just spectacular, maybe not as breathtaking as Conquest of Paradise they did in 2008, but it’s still very impressive. A sweet young man and an elderly gentleman both shed a tear as Kimmy did Casta Diva, but I think the edges were chopped off a bit to suit the cinema format, at one time Kimmy had almost only half a face remaining at the far right of the screen, and Andre’s head touched the very top of the screen a few times. As before, Andre had to lead the Staar in the movements for When I’m Sixty-four. I looked at Andre and saw a very charming big smile on his face, as if he’s telling the Staar “Haha! I’ll be 63 in a few months, and when I’m 64, I bet I still have a lot more hair than you do!” Carmen was doing a good job trying to seduce Andre when she did Habanera, but Boss had good discipline. Don’t you just love how he rolled his eye, I tried but I looked really ugly! O Fortuna...what can I say, it’s soooo breathtaking... Radetzky March was a shorter version but still the time to say “Let’s get this party started!”...and you have people packed in the moshpit. Actually one advantage of watching the concert on big screen is that we have English subtitles, while in Maastricht, I would need Ruud to translate Andre’s speech to me. And you know how Andre loves teasing his audiences “Is that your wife?” Are you sure?” With all the cameras used at Vrijthof for recording audiences, it’s so easy that you get caught if you cheat, so another advantage in CinemaLive is that there’s no camera... not that I’m encouraging you... kekekeke J

During encores, about a minute before Y Viva Espana, a guy on wheelchair was stomping his right foot ... miracle!! Father Abraham performed 2 songs that he wrote, The Smurf song and of course The Red Rose Cafe. I’m surprised that so many audiences still remembered the lyrics to a cartoon song ... I mean, not just the la-la-la-la part. Trio St. Petersburg had only one song but it was a good one. Andre had started to do his “Go home! Bedtime!” trick and many audiences were laughing like crazy. He didn’t say “I go drink” anymore, maybe Boss had to be on diet and really had to behave well. It was funny enough when we watched DVDs at home, and with the big screen and big sound, it seemed like Andre was really shouting hard and loud “GO HOME!!!” LOVE it when people kept saying “NO”! Now I know why Berys was able to catch such a great fun photo of Andre in Adieu, he literally went down sidewards and paused for a good few seconds, that was just the funniest photo. Marina ... marina ... marina ... with fireworks almost more than what we got for Canada Day. Super! A Happy Grand Finale!!!

Oh well... Everything has an end. As Queen Beatrice said, “Too short”! ...the credits at the end finally scrolled out, but before we said Adieu to each other, we still had a mission. All the females went into the women’s room. I brought several Andre T-shirts with me and my colleagues put them on for a photo. It was a funny scene while I pulled out all my stuff, T-shirts, scarf, bear...from the Andre bag, plus the noises we made. A couple of ladies seemed to be enjoying what we’re doing in the washroom, I asked “Do I look like I’m selling merchandise here?” “Yes, you do, you do!!” We all laughed even harder! The rest of our group, mostly men, were patiently waiting outside, they had to anyway. While we’re taking our group photos, other people seemed to be amazed by our Andre spirit with a variety of Andre gear.

“When he comes to Vancouver again, we’ll go see him”... yes, we have people converted this evening ... they thanked me for arranging this, and we all took off happily. 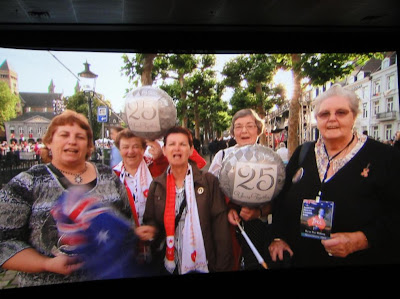 Jul 28, Saturday:This would be the day I could take a better look at what I’ve missed. I took a few more pics of the cinema to get you a better idea of how they presented our Andre, not bad but it’d be nicer if they had a Cardboard Andre as well. Today I went with my family and a colleague from work. There were less audiences today, about 50, I think. I had my camera ready this time for the ANZACS to appear, the pic was a bit blurred but when I saw the pic afterwards...OMG! How could I have missed our Royal Queen Bee the first time, and Mrs. Ed made her appearance again with Kiwi Kathy. I also saw Mr. Don’t-know-what-to-call-him-anymore security guard just before the 76 Trombones (again, the name has its story from my previous reports). And I confirmed that the one sitting next to The Oswicks was indeed Anna, except Anna appeared to be just about 6 feet wide and not 8, as she’s a bit further away from the camera.

After the concert, we took pics and again, we drew some attention with our Andre gear. There was a group of enthusiastic fans who wondered where I got those T-shirts from, and while we chat, one lady said she’s from Limburg. I told them I’d be writing up something for a fans website, and asked if they’re interested to take a picture together and I’d include it. Next thing she said “I’m from Maastricht”. “WHAT??? Well ladies, you’re definitely going into the picture.” Wasn’t it amazing that we could meet up with some strangers just like that?? And took a nice picture we can treasure for a long time? Hello Brigitte from Maastricht, if you’re reading this and found our group photos, congratulations, you have just discovered the most popular Andre’s English speaking fans website. And again, it was soooo nice meeting you. 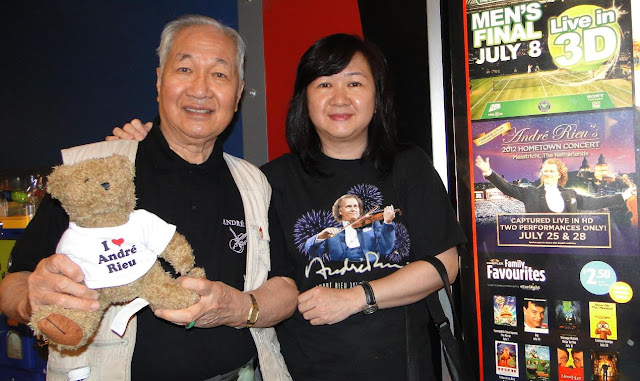 Well folks, are you all doing okay??
This thing is getting lengthy again,
but hope you’ve enjoyed reading it,
and I hope to see Andre and my friends again in 2013!